The Shidduch Detective:  On the Trail for Down the Aisle 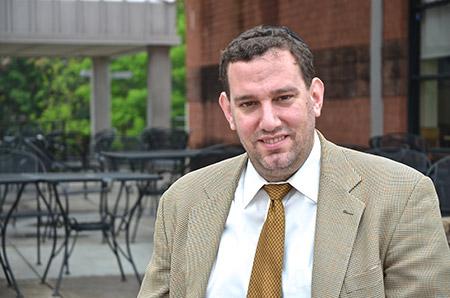 Though he stands an imposing 6 feet, 4 inches, astonishingly, there is something very unassuming about David J. Cohen’s presence. Perhaps it’s this combination, with his boyish grin and understated manner, that plays to his benefit, because for the past 20 years he’s surreptitiously, yet doggedly, investigated, conducted surveillance and performed background checks for high-profile, high-dollar criminal and civil cases.

Now, Cohen, an Orthodox private investigator, offers his services to fill a niche that harkens back to his Jewish roots.

Through discreet and thorough background investigation, Cohen says he can provide peace of mind to men and women and their families who enter marriages, for example, when the couple may know each other only a few weeks before a wedding ceremony — as sometimes practiced in the Orthodox Jewish community.

Sara Freed, a certified relationship and divorce coach in Brooklyn, N.Y., who specializes in that community, said nearly 30 percent of first-time marriages end in divorce, and the number is even higher — about 50 percent — for second marriages. Overall, she thinks hiring a private investigator to inquire into the background of a potential partner is a good idea because it could produce more comprehensive results (due to an investigator’s ability to access more information) than a shadchan, or matchmaker, could provide.

“But like anything new, it would be a different way of going about the Orthodox shidduch (matchmaking) process,” Freed said. “Like everything else, it would take time to pick up [popularity].”

She compares it to other challenging topics she’s come across in her four years of working with couples.

“I’m very discreet, I’m careful who I contact. You have to know the language to use. I’m not coming in as an outside investigator. I’m able to walk the line between being discreet and getting the info.”

“One of the most difficult things is to talk about money in a marriage. Just because it’s uncomfortable doesn’t mean it shouldn’t be done. Investigating a potential partner could come under that same category.”

Raised in New York’s Monsey Orthodox community, Cohen now resides in Annapolis and serves clients all along the East Coast from the Baltimore-Washington area to Philadelphia, New Jersey and New York. Pursuing justice and looking out for someone’s best interests is a strong vein in Cohen’s character, and he’s cultivated those innate abilities since childhood. Honing his skills has been a lifelong pursuit.

“I’m very discreet, I’m careful who I contact,” Cohen says, citing his deep familiarity with yeshivas, rabbinical circles and the Orthodox community in general. “You have to know the language to use. I’m not coming in as an outside investigator. I’m able to walk the line between being discreet and getting the info.”

Bill Kryos, a plaintiff attorney with Kryos Law Offices in Boston, hasn’t actually met Cohen face to face, but he trusts him implicitly.

His firm represents victims of fraud or consumers harmed by negligence. In Kyros’ words, he goes after “big companies that do bad things.”

He’s enlisted Cohen for “whistleblower” cases, most often in publicly traded companies or in health care. This occurs when a nurse or doctor or somebody in billing is aware of fraud taking place, such as over prescribing or over-coding for a patient’s care.

“David is tenacious in tracking those people down to verify statements,” Kryos said. “He’s good at locating those folks and very good with people. David just has a unique ability to get people on the phone, keep them on the phone and get info that we require.”

Kryos added, “And his turnaround time is very quick. Usually he comes up with stuff within a day. And if he doesn’t, he’ll keep tracking them down. He’s relentless.”

On a different note, Cohen also connects people together. He’s conducted relative searches, a most notable example was for a mother who had given up her daughter for adoption, and they hadn’t seen each other for more than 30 years.

“It took me only a few hours, I had good information [to work with],” Cohen said. “Some cases it could take days. That was a very rewarding case, I was able to reunite a mother and daughter who remain close today.”

Cohen continues to work on criminal and civil cases. He’s also occasionally hired by suspicious husbands or wives and has conducted a handful of spouse-to-be background checks. If, for some reason, working on a pre-matrimony background check wouldn’t allow him to remain impartial, he would turn it down, he said.

He also takes the Jewish law of lashon hara, or derogatory speech about another, into consideration regarding his work. He’s been studying it in more depth over the past year, and it consists of many intricate laws.

“You have to go the extra mile to give people the benefit of the doubt,” Cohen said. “The question is, if you have something that’s potentially concerning, but you’re not 100 percent. If it’s obvious, yes, you have to report it. But [if it’s] on the borderline of ‘not sure,’ do you divulge it or not? If you do, you could ruin [a person’s] career. Or if it was in the persons’ past history and they repented and moved on — do you report it? Those are the questions that are very delicate in how to deal with things,” and ultimately, he said, each is considered on a case-by-case basis. He added, “[It’s about] balancing your livelihood with learning more about your spirituality.”

Read the original in the Jewish Times.